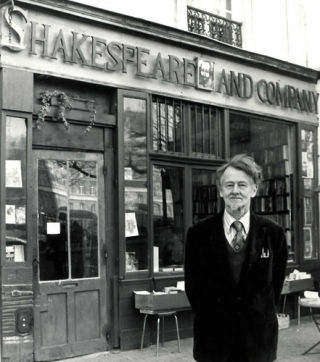 George Whitman, founder of the Parisian bookshop Shakespeare and Company, died last week at age 98. Critics say it likely wasn’t the best bookshop in the world, or even Paris for that matter, but Shakespeare and Company was one of the most famous. Two tributes to Mr. Whitman were recently published: one at The Book Bench blog and the other at The Telegraph. This is what Tim Martin wrote in The Telegraph:

“But if youâ€™re one of the innumerable tourists who flock to Shakespeare and Co each year, itâ€™s a fairly safe bet that youâ€™re not going exclusively for the books. You visit for the history: for the chance to poke round the famous upstairs library and reading room where Samuel Beckett, Lawrence Durrell and Allen Ginsberg sipped tea, and for a glimpse into the world’s most famous literary dosshouse, a â€œsocialist utopia masquerading as a bookshopâ€ over which Whitman presided with irascible charm between 1951 and 2003. (If youâ€™re visiting in search of the Modernist hangout that hosted Beckett, Joyce, Hemingway, Stein and Eliot, look elsewhere: that shop closed after the Second World War, but Whitman adopted the name in the Sixties as a tribute to its founder Sylvia Beach.)”