Robert Boyton remains bullish on journalism. In 2005 he published The New New Journalism, which argued that the American long-form journalism was thriving. Pre-Twitter, pre-Facebook, pre-Recession. Was his argument premature? No. There is still room for thriving nonfiction. Part of his optimism is based on the belief that people in industrial societies “still expect better things in their lives,” which includes all forms of journalism. Boyton also believes that the current economic conditions merely force journalists to add different forms of writing and reporting to the repertoire rather than abandon what has been done before. 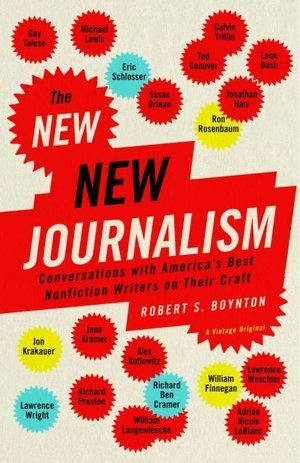 “Every fall, when I greet the new group of NYU students, the first thing I do is welcome them to the house of journalism. It is a big house, I explain, with many differently shaped and designed rooms. The rooms have names like â€œblog post,â€ â€œfeature,â€ â€œessay,â€ â€œforeign reportâ€ and â€œbook,â€ and seems to add a room or two every year. In order to have a long and enjoyable career, I continue, they must find one room they truly love, and decorate and design it so that it reflects their very best attributes. In addition, they need to find a few other rooms where they feel comfortable, since one canâ€™t live in a single room forever. Each of the rooms has a different function, and must be maintained in a way that makes sense for it.”

Expanding on the metaphor a bit, Boyton believes that publishers and newspapers themselves, not just journalists, must adapt to this new climate. “Iâ€™d compare the current thinking about business models for journalism to the real estate developer who builds nothing but malls. What we need, the thinking goes, is as many large, easily designed, open spaces as possible, the better to lead masses of people through. Contemporary journalism has broken down the walls, and wants everyone to sit in the same room (usually the busiest, loudest room in the house). A collection of idiosyncratic houses, each containing different sized rooms is too confusing and cluttered, the thinking goes. No, the trick is to â€œgo bigâ€ and throw enormous parties to which everyone is invited. How else can a website attract millions of â€œhitsâ€?”

Do you believe him? His argument is obviously more complicated and nuanced than what I have summarized here. I’d encourage you to read his entire article.