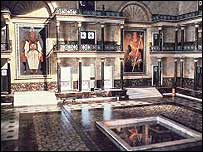 This is a fascinating story. It seems that archeologists have found what they believe to be the site of the famed Library of Alexandria. Here is a news excerpt from the BBC: “A Polish-Egyptian team has excavated parts of the Bruchion region of the Mediterranean city and discovered what look like lecture halls or auditoria. Two thousand years ago, the library housed works by the greatest thinkers and writers of the ancient world. Works by Plato and Socrates and many others were later destroyed in a fire.

“Announcing their discovery at a conference being held at the University of California, Zahi Hawass, president of Egypt’s Supreme Council of Antiquities, said that the 13 lecture halls uncovered could house as many as 5,000 students in total. A conspicuous feature of the rooms, he said, was a central elevated podium for the lecturer to stand on.

“It is the first time ever that such a complex of lecture halls has been uncovered on any Greco-Roman site in the whole Mediterranean area,” he added. “It is perhaps the oldest university in the world.”

According to the BBC article, the Library of Alexandria was the birthplace of geometry. “It was at the library that Archimedes invented the screw-shaped water pump that is still in use today. At Alexandria Eratosthenes measured the diameter of the Earth, and Euclid discovered the rules of geometry. Ptolemy wrote the Almagest at Alexandria. It was the most influential scientific book about the nature of the Universe for 1,500 years. The library was later destroyed, possibly by Julius Caesar who had it burned as part of his campaign to conquer the city.”

This photo is a reconstruction of how the hall was believed to look, made for Carl Sagan’s Cosmos in 1980. Fascinating.