The Public and Its Problems 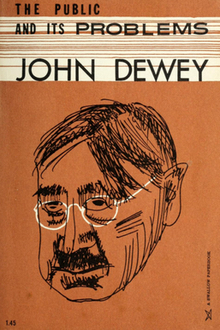 The Public and Its Problems by John Dewey

From Amazon’s description: “A classic in social and political philosophy. In his characteristic and provocative dialectic style, John Dewey clarifies the meaning and implications of such concepts as “the public,” “the state,” “government,” and “political democracy”; distinguishes his a posteriori reasoning from a priori reasoning which, he argues, permeates less meaningful discussions of basic concepts; and repeatedly demonstrates the interrelationships between fact and theory. As in his other writings, Dewey exhibits his strong faith in the potential of human intelligence to solve the public’s problems.”