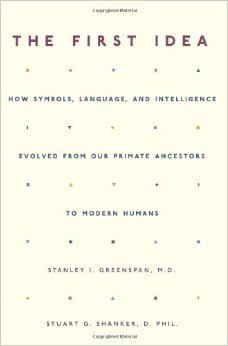 This sounds like a fascinating book: THE FIRST IDEA: How Symbols, Language, and Intelligence Evolved from our Primate Ancestors to Modern Humans, writtten by Stanley Greenspan and Stuart Shanker.

“Its authors, one a psychiatrist and the other a psychologist and philosopher, have teamed up to tackle the momentous question of how humans developed language,” writes Ruth Walker in a review in the Christian Science Monitor. “Fearing not to challenge some of the heavyweights of modern science, from Jean Piaget to Noam Chomsky and Steven Pinker, they present their own theory: The development of language is connected primarily with affect rather than cognition, with the emotional learning that occurs in infants in the arms of those who love them. That is, language is rooted not in genes, not in the wiring of brains, but in behaviors we have learned over millenniums.”

This subject has been an interest of mine for some time, and I am a great fan of Steven Pinker’s work. I am eager to see how the theories match up. Also, from my work at Training magazine, I came to know many of the theories regarding emotional intelligence. Walker writes, “Phrases like “emotional intelligence” and “the feeling brain” sound less oxymoronic today than they did before they appeared in the titles of groundbreaking works by Daniel Goleman and, more recently, Antonio Damasio. But in “The First Idea,” Stanley Greenspan and Stuart Shanker contend that “emotional intelligence,” as it is coming to be understood, is only one of the “roots and branches” of intelligence itself. “The trunk,” they argue, is a set of abilities they refer to as the “functional-emotional developmental capacities.”

Yet emotions play a significant role in developing language. Says Walker in her review: “Lived emotional experience is key to language learning, the authors suggest. “Mathematicians and physicists may manipulate abstruse symbols representing space, time, and quantity, but they first understood those entities as tiny children wanting a far-away toy, or waiting for juice, or counting cookies. The grown-up genius, like the adventurous child, forms ideas through playful explorations in the imagination, only later translated into the rigor of mathematics.”

It’s bound to be an interesting read for sure. I am anxious to see what other critics will have to say about the book. “It would be simplistic to say that the authors see games of peekaboo and patty-cake as the foundations of civilization,” writes Walker, “but it would not be completely wide of the mark. It is just this sort of nonverbal “conversation,” the authors argue, that was essential to the development of language.”