The Death of the Book 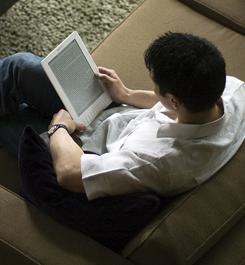 It has been said practically since it was first developed that the codex is on a march toward extinction. Yet, for the first time in history e-books have outsold print. Maybe this time, it’s true, writes Ben Ehrenreich in the Los Angeles Times.

“None of this is new of course. Nor is it new to point out that people have been diagnosingâ€”and celebratingâ€”the bookâ€™s imminent demise for generations. It is possible to regard much of Western avant garde poetry and prose as an extended argument with the bound pages from which literature would prefer to break free. In a 1913 manifesto, Filippo Marinetti (a futurist of the OG sort) called for â€œa typographic revolution directed against the idiotic and nauseating concepts of the outdated and conventional book.â€ His insurrectionary program may now seem quaintâ€”â€œon the same page we will use three or four colors of ink, or even twenty typefaces if necessaryâ€â€”but Marinetti was not alone in rebelling against the uniformity imposed on language by the standard typeset page. Similar urges ran through most of the high modernists, certainly through Stein, Joyce, and Pound, and through the iconoclastic American poet and journalist Robert Carlton Brown (better known as Bob), who, in the late 1920s, envisioned a reading machine designed to liberate words from the static confines of the page. Brown imagined something like a desk-sized microfiche reader capable of displaying spooled celluloid texts called â€œreadies.â€ â€Writing has been bottled up in books since the start,â€ he wrote. â€It is time to pull out the stopper.â€

This is my favorite paragraph from Ehrenreich’s well-written essay: “It is perhaps a symptom of printâ€™s decline that the current conversation about the bookâ€™s demise has forgotten all these other ones. Instead we shuttle between two equally hollow poles: goofball digital boosterism a la Negroponte on one side and on the other a helpless, anguished nostalgia for the good old days of papercuts. Call it bibilionecrophilia: the retreat of the print-faithful into a sort of autistic fetishization of the book-as-objectâ€”as if Jeff Bezos could be convinced to lay e-profits aside by recalling for a moment the soft, woody aroma of a yellow-paged Grove Press paperback; as if there were nothing more to books than paper, ink, and glue.”