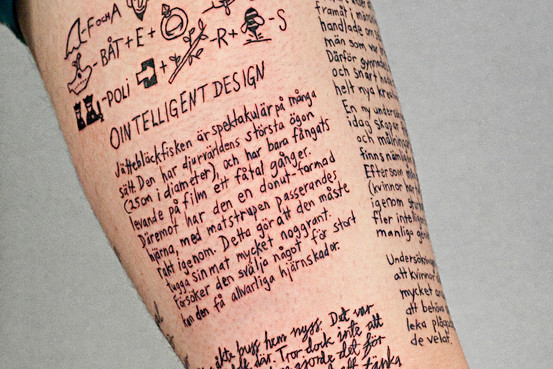 This is certainly taking magazine publishing to a new level. In an age that has magazine publishers looking for a medium more renewable than ink on paper, this publisher has created something more permanent than the page. He published his latest issue as a tattoo–on himself. From the Wall Street Journal: “Marc StrÃ¶mberg is a 22-year-old graphic designer in Ume, Sweden, and his leg is still sore. He creates record sleeves and posters for bands, and in his spare time he runs his own magazine, Tare Lugnt. Instead of publishing the latest edition in traditional paper and ink, he has had issue three entirely tattooed onto his left leg. The leg has now been photographed, and large-scale prints are due to go on display in GÃ¶teborg and Stockholm this month.”

“It seemed like a really untraditional and extreme way to publish the magazine. I think that everyone should explore new mediums, all the time. We should experiment and have the guts to do something that stands out. It would have been boring to do just another magazine on paper. I originally wanted to do a pair of long underwear, with the articles printed on the material, so you could wear them, lie down on the couch and read the magazine off your own legs. It sprung from that idea, taken a little further.”