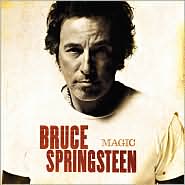 As many of my friends know, I’m a huge Bruce fan. I’ve been listening to his new albulm, Magic, almost nonstop this week. There’s not much to say other than it’s wonderful. I can’t wait to see him next month when he brings the E Street Band to the Xcel Center in St. Paul. Here’s what A.O. Scott of the New York Times had to say about the album.

“There is a brightness of sound and a lightness of touch that are not quite like anything else Mr. Springsteen has done recently….The paradox of â€œMagicâ€ may be that some of its stories are among the toughest he has told. The album is sometimes a tease but rarely a joke. The title track, for instance, comes across as a seductive bit of carnival patter, something you might have heard on the Asbury Park boardwalk in the old days. A magician, his voice whispery and insinuating in a minor key, lures you in with descriptions of his tricks that grow more sinister with each verse. (â€œIâ€™ve got a shiny saw blade/All I needâ€™s a volunteer.â€) â€œTrust none of what you hear/And less of what you see,â€ he warns. And the songâ€™s refrain â€” â€œThis is what will beâ€ â€” grows more chilling as you absorb the rest of the albumâ€™s nuances and shadows….And while the songs on â€œMagicâ€ characteristically avoid explicit topical references, there is no mistaking that the source of the unease is, to a great extent, political.”