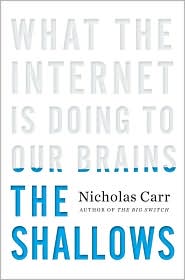 It’s the technophobes versus the technophiles. At least that’s the knee-jerk assessment of the debate between those who praise the latest e-book portable devices and those who say that nothing tops the printed page. Where do you fall? In many ways it can be seen as a debate about form rather than function; e-books simply pick up where books leave off. The reading experience is not significantly different on a e-reader, tech advocates say, but such devices allow you to do so much more than the traditional codex. You can carry a lifetime’s worth of reading material in a single device. You can shop and buy at will, using the device itself to feed your every textual whim. No longer must customers wait to get the latest bestseller, but publishers need not print and distribute thick bound volumes in the hopes of enticing a buyer at the store. What’s not to like, correct?

But there’s a flip side to the argument being made. Those who make their claim against the digital word say that the argument is more than a matter of form. Sure, the first (and perhaps loudest) complaint against the digital device is one of aesthetics. “I love my book. I love turning the printed page. I love the feel, shape, smell and weight of the text in hand.” Perhaps that’s enough of an argument against the onslaught of digital media; I don’t want my every encounter with a new book to be exactly the same experience (as it would be with your device of choice, be it a Kindle, iPad or a Nook) for the rest of your reading life. End of story. But that’s enough for those who feel they are on the side of progress to label you a simple Tweed-wearing, hard-bound book loving, “those-kids-on-Twitter-don’t-know-what-they-are-missing,” Luddite. (OK, maybe not that bad but you get my point.)

Yet many critics of the e-book are beginning to craft an even bigger argument beyond “don’t change it if it ain’t broke.” They argue that today’s digital environments have changed how we encounter long-form text. And if we don’t take note of what’s being changed, both neurologically in our brains and sociologically in how our society encounters and incorporates new ideas, we could begin to lose what makes human culture what it is. Such is the premise of a new book out by Nicolas Carr, who has been featured in this blog before when he wrote a cover story in Atlantic called “Is Google Making us Stupid.” In his latest book, The Shallows: What the Internet is Doing to our Brains, Carr writes about how even his own brain has begun to rewire itself as a result of the many distractions created by the Web, email, Twitter, etc.

A description from Barnes and Noble and the Library Journal: “Expanding on his provocative Atlantic Monthly article, “Is Google Making Us Stupid?,” technology writer Carr (The Big Switch) provides a deep, enlightening examination of how the Internet influences the brain and its neural pathways. Computers have altered the way we work; how we organize information, share news and stories, and communicate; and how we search for, read, and absorb information. Carr’s analysis incorporates a wealth of neuroscience and other research, as well as philosophy, science, history, and cultural developments. He investigates how the media and tools we use (including libraries) shape the development of our thinking and considers how we relate to and think about our brains. Carr also examines the impact of online searching on memory and explores the overall impact that the tools and media we use have on memory formation. His fantastic investigation of the effect of the Internet on our neurological selves concludes with a very humanistic petition for balancing our human and computer interactions.”

More than just a change in information access, e-books also pose a threat to literary culture. Nobel laureate Nadine Gordimer also put her hat into the debate this week at the Guardian Hay festival, saying (courtesy the Guardian) “there is no substitute for the book, and it would be a great deprivation and danger if the book should disappear and be replaced by something with a battery … I am not talking in a fuddy-duddy way about this. These things are wonderful for disseminating information.

“But for poetry, for novels, stories â€“ those things that have the imagination at their heart â€“ there is no substitute for the book.”

Speaking about the future of library and literary culture, Gordimer said that the future involves the printed page, particularly in poverty-stricken African villages where the need for education is most important. But while online and mobile technology is wonderful for disseminating information to far flung locations, Gordimer argues, it’s the durability of the book that holds the most promise. “This is a very big question: whether technology will outstrip the printed word. But with a gadget you are always dependent on a battery and on power of some sort. A book won’t fall apart; you can read it as easily on a mountaintop as in a bus queue. The printed word is irreplaceable, and much threatened.”

Minnesota’s own Garrison Keillor takes a look at the demise of print culture from a different perspective in this recent Op-Ed in the New York Times. He views the move to digital as having a detrimental effect on publishing itself. “Call me a pessimist, call me Ishmael, but I think that book publishing is about to slide into the sea. We live in a literate time, and our children are writing up a storm, often combining letters and numerals (U R 2 1derful), blogging like crazy, reading for hours off their little screens, surfing around from Henry James to Jesse James to the epistle of James to pajamas to Obama to Alabama to Alanon to non-sequiturs, sequins, penguins, penal institutions, and itâ€™s all free, and you read freely, youâ€™re not committed to anything the way you are when you shell out $30 for a book, youâ€™re like a hummingbird in an endless meadow of flowers.”

If you want to write, just publish yourself, says Keillor. “And that is the future of publishing: 18 million authors in America, each with an average of 14 readers, eight of whom are blood relatives. Average annual earnings: $1.75.” Sure, you can write whatever you like, he says, but then everyone in the world will “exercise their right to read the first three sentences and delete the rest.” His op-ed is over the top as only Keillor can write, but I encourage you to read it.

An end of an era? My favorite paragraph: “Children, I am an author who used to type a book manuscript on a manual typewriter. Yes, I did. And mailed it to a New York publisher in a big manila envelope with actual postage stamps on it. And kept a carbon copy for myself. I waited for a month or so and then got an acceptance letter in the mail. It was typed on paper. They offered to pay me a large sum of money. I read it over and over and ran up and down the rows of corn whooping. It was beautiful, the Old Era. Iâ€™m sorry you missed it.”