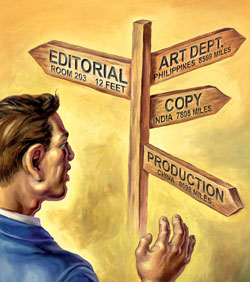 Are magazines next? That’s the question put forth in this month’s Folio magazine, the trade magazine for those in the magazine publishing business. The question refers to that political hot button of the day: outsourcing.

“It’s an increasingly familiar picture: the transfer of work that was once done by full-time employees in the U.S. to overseas contractors for a fraction of the price,” writes Folio’s Karen Holt. “It’s a fait accompli in customer service, direct marketing and information technology. Now, it’s the magazine business’s turn. Editorial, design, production and advertising functions are all being performed cheaper â€” and some contractors and publishers claim better â€” overseas.”

According to the Folio article, magazine publishing presents all of the same qualities that made other industries ripe for outsourcing opportunities, including “the lack of face-to-face customer service, work processes that enable telecommuting and Internet work, high wage differentials between countries, a high information content, low social networking requirements and low set-up costs.â€ According to a report published by the University of California, Berkeley last fall, says the magazine, as many as 14 million jobs could be shifted outside the U.S. by 2015–among them, magazines.

â€œI think there’s more and more opportunity,â€ says Frank Stumpf, president and COO of SPI Publisher Services, which does prepress services such as layout and copyediting, as well as file conversion from print to electronic format for professional and scholarly journals in Manila. â€œCopyediting is one of the more labor intensive parts of the magazine business, so it’s a highly likely thing for people to consider moving offshore.â€

“But Barbara Wallraff, a language columnist for the Atlantic Monthly and editor of the Copy Editor Newsletter, says copyediting is too sophisticated a function to be farmed out to someone in another country. â€œIf it’s quality that the companies care about for the great majority of copyediting applications, offshoring wouldn’t be the way to go,â€ she says. â€œSo we need to do a good job of explaining why good, solid domestic editing does have value.â€” An interesting debate indeed, not only on the nature of the work, but what it may mean for our culture if our cultural products are no longer produced in this country.