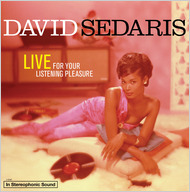 Audiobooks are certainly not new, but this has to be. Author David Sedaris has released his latest audiobook, “Live for Your Listening Pleasure,” on vinyl. From the New York Times:

“As physical formats and devices have shrunk, revenues for the audiobook industry have grown, since it is more convenient to listen to an iPod while exercising and commuting than fiddling with CDs. Digital downloads grew to 21 percent of the industryâ€™s total sales in 2008, from 6 percent in 2004, according to the Audiobook Publishers Association … Reminiscent of Blue Note albums from the 1950s and 1960s, the cover features a photograph of a woman sprawled on a white shag rug with a come-hither look, albums strewn about.”

Anyone familiar with Sedaris would hardly find this surprising. I would certainly expect something unique from him. According to the Times, vinyl has made a comeback in recent years, selling $57 million in 2008, the best since 1990. But audiobooks on vinyl are so rare that the figures have never been tracked.