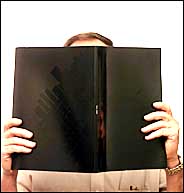 Here’s a new concept in magazine journalism. “What would you call a magazine with no newsstand sales, just five articles, four ads, and an unknown, very small, number of subscribers?” asks David Carr of the The New York Times. “If you are the publishing arm of American Express, you would call it nothing.”

Beginning this week, according to the Times, this new nameless magazine will begin mailing to holders of the Centurion card, the elite credit card from American Express that features a design much like the corresponding magazine: “a black-on-black pattern designed by Tomas Maier, the creative director of Bottega Veneta.”

The cover of each magazine will be different, yet they will not have a name, say the magazine’s founders. “The magazine is designed to serve as a point of identity for holders of the Centurion card, the company’s most exclusive credit card,” writes Carr. “American Express does not like to disclose the number of the so-called black cardholders, but they have to spend more than $150,000 a year for the privilege of paying an annual fee of $2,500 for their credit card. And even then, they have to be invited.

So how many people actually have a Centurion card? asks Carr. “About the same number of people who can afford a Mercedes Maybach,” said Desiree Fish in the article, a spokeswoman for American Express, referring to a luxury car that can list for more than $300,000. At an industry conference in 2001, the company said that about 5,000 people have a Centurion card in their back pocket.”