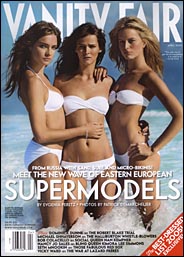 Why haven’t Vanity Fair’s recent issues sold on the newstand as they once have? In a word: men. According to Lia Miller’s recent article in the New York Times, the cover models are to blame.

"Graydon Carter, the editor of Vanity Fair, blamed the cover models for his magazine’s flagging newsstand sales in a recent interview with Women’s Wear Daily," Miller writes. "The drop, he said, was the result of three covers in a row featuring men at the end of 2004 – Jude Law in October, Johnny Depp in November and Leonardo DiCaprio in December."

Newstand sales have dropped 22.5 percent in the last half of 2004, Miller writes. Breaking from Vanity Fair’s traditional cover treatment of a portrait of Hollywood starlets, the April issue features three European models in white bikinis. "Vanity Fair may be trying to bolster sales through the tactics of magazines such as Maxim, whose covers have perfectly exploited that ideal nexus of women and attractiveness – the sexy young model in a bikini," writes Miller. "There has not been a model on Vanity Fair’s cover since 1994, when Cindy Crawford was featured."