John Marshall: The Chief Justice Who Saved the Nation 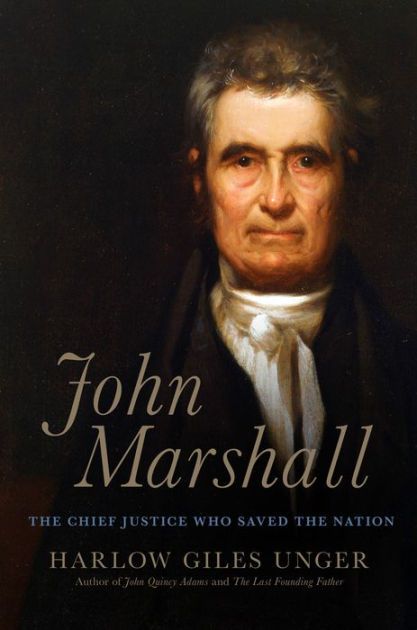 John Marshall: The Chief Justice Who Saved the Nation by Harlow Giles Unger

From the publisher: “A hero in America’s war against British tyranny, John Marshall with his heroics as Chief Justice turned the Supreme Court into a bulwark against presidential and congressional tyranny and saved American democracy.

“In this startling biography, award-winning author Harlow Giles Unger reveals how Virginia-born John Marshall emerged from the Revolutionary War’s bloodiest battlefields to become one of the nation’s most important Founding Fathers: America’s greatest Chief Justice. Marshall served his country as an officer, Congressman, diplomat, and Secretary of State before President John Adams named him the nation’s fourth Chief Justice, the longest-serving in American history. Marshall transformed the Supreme Court from an irrelevant appeals court into a powerful branch of government — and provoked the ire of thousands of Americans who, like millions today, accused him and the court of issuing decisions that were tantamount to new laws and Constitutional amendments.

“And the Court’s critics were right! Marshall admitted as much.

“With nine decisions that shocked the nation, John Marshall and his court assumed powers to strike down laws it deemed unconstitutional. In doing so, Marshall’s court acted without Constitutional authority, but its decisions saved American liberty by protecting individual rights and the rights of private business against tyranny by federal, state, and local government.”