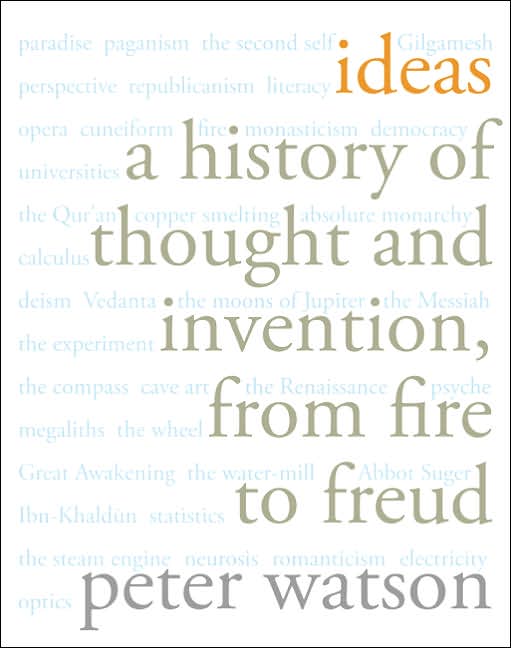 This looks like a very interesting book: Ideas, by Peter Watson. He is also the author of The Modern Mind. His new one just hit the shelves. I think I may have to look at it when I get back from my trip. I’m off to the U.S. Open!

Here is what the publisher has to say about Ideas: “In this hugely ambitious and stimulating book, Peter Watson describes the history of ideas, from deep antiquity to the present day, leading to a new way of understanding our world and ourselves.

“The narrative begins nearly two million years ago with the invention of hand-axes and explores how some of our most cherished notions might have originated before humans had language. Then, in a broad sweep, the book moves forward to consider not the battles and treaties of kings and prime ministers, emperors and generals, but the most important ideas we have evolved, by which we live and which separate us from other animals. Watson explores the first languages and the first words, the birth of the gods, the origins of art, the profound intellectual consequences of money. He describes the invention of writing, early ideas about law, why sacrifice and the soul have proved so enduring in religion. He explains how ideas about time evolved, how numbers were conceived, how science, medicine, sociology, economics, and capitalism came into being. He shows how the discovery of the New World changed forever the way that we think, and why Chinese creativity faded after the Middle Ages.

“In the course of this commanding narrative, Watson reveals the linkages down the ages in the ideas of many apparently disparate philosophers, astronomers, religious leaders, biologists, inventors, poets, jurists, and scores of others. Aristotle jostles with Aquinas, Ptolemy with Photius, Kalidasa with Zhu Xi, Beethoven with Strindberg, Jefferson with Freud. Ideas is a seminal work.”