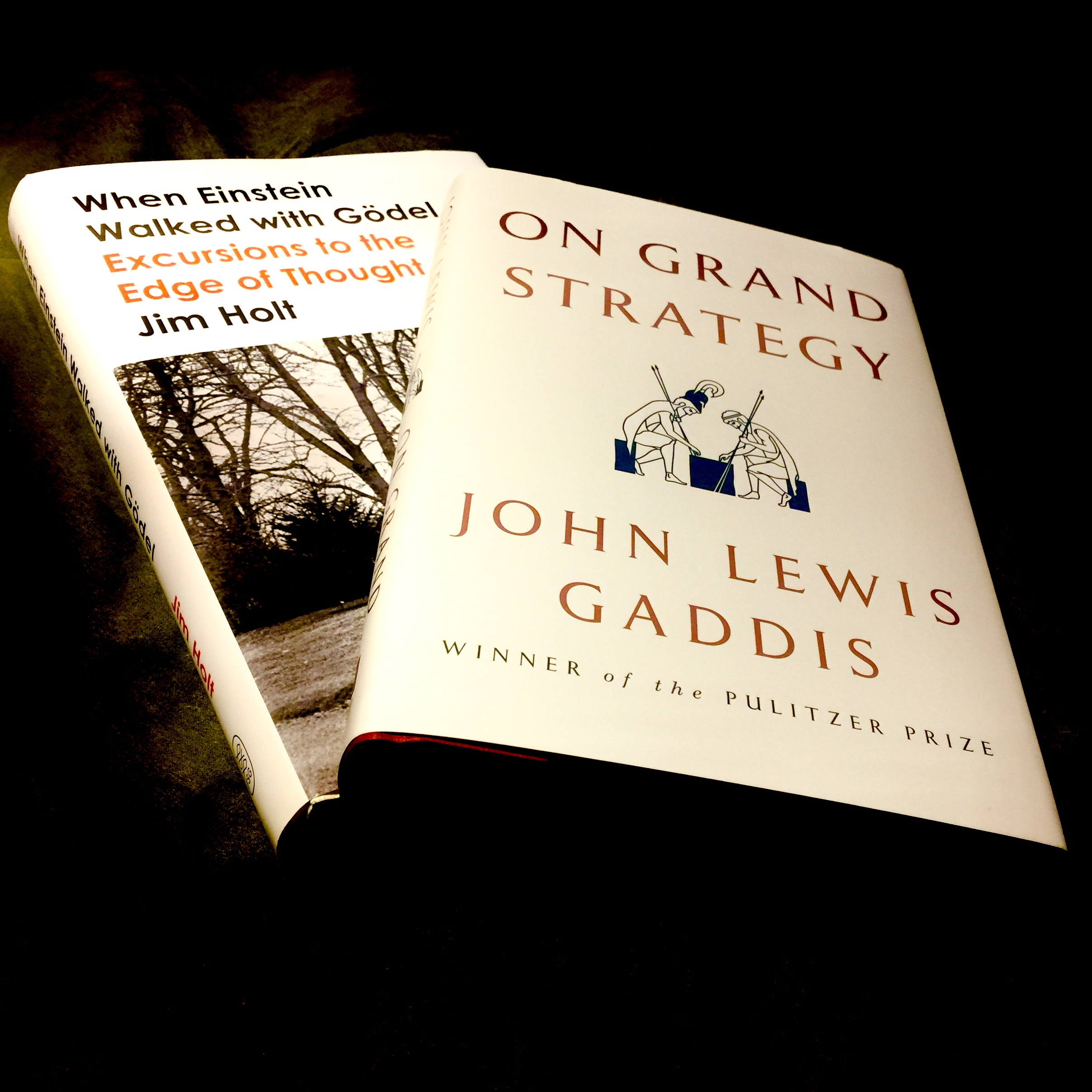 I am putting together my reading for fall, and two books arrived today that are high on the list: On Grand Strategy by John Lewis Gaddis, and When Einstein Walked with Godel by Jim Holt. You could say that both are alike in that each explores ideas from across their respective subjects of science and political philosophy. I can’t wait to get to them. Holt is a wonderful writer who tackles complicated scientific ideas with accessible prose. I highly recommend his earlier work, Why Does the World Exist? Gaddis is a history professor at Yale University, and he won the Pulitzer Prize for his biography, George F. Kennan: An American Life. Here are portions of the publishers’ descriptions of their latest works.

On Grand Strategy: “John Lewis Gaddis, the distinguished historian of the Cold War, has for almost two decades co-taught grand strategy at Yale University with his colleagues Charles Hill and Paul Kennedy.  Now, in On Grand Strategy, Gaddis reflects on what he has learned.  In chapters extending from the ancient world through World War II, Gaddis assesses grand strategic theory and practice in Herodotus, Thucydides, Sun Tzu, Octavian/Augustus, St. Augustine, Machiavelli, Elizabeth I, Philip II, the American Founding Fathers, Clausewitz, Tolstoy, Lincoln, Wilson, Franklin D. Roosevelt, and Isaiah Berlin.  On Grand Strategy applies the sharp insights and wit readers have come to expect from Gaddis to times, places, and people he’s never written about before.  For anyone interested in the art of leadership, On Grand Strategy is, in every way, a master class.”

When Einstein Walked with Godel: “Does time exist? What is infinity? Why do mirrors reverse left and right but not up and down? In this scintillating collection, Holt explores the human mind, the cosmos, and the thinkers who’ve tried to encompass the latter with the former. With his trademark clarity and humor, Holt probes the mysteries of quantum mechanics, the quest for the foundations of mathematics, and the nature of logic and truth. Along the way, he offers intimate biographical sketches of celebrated and neglected thinkers, from the physicist Emmy Noether to the computing pioneer Alan Turing and the discoverer of fractals, Benoit Mandelbrot. Holt offers a painless and playful introduction to many of our most beautiful but least understood ideas, from Einsteinian relativity to string theory, and also invites us to consider why the greatest logician of the twentieth century believed the U.S. Constitution contained a terrible contradiction—and whether the universe truly has a future.”