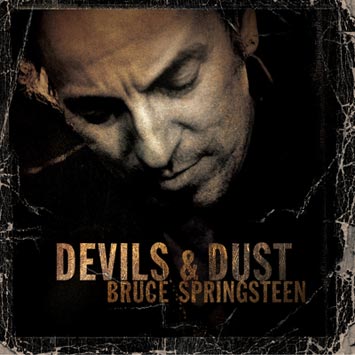 On April 26, Bruce Springsteen will release his new CD Devils & Dust. According to reports, it will be a Dual Disc, with the CD content one one side of the disc, and live concert footage on the DVD content on the other side. Here is a report from Backstreets, a fan site:

"How’s this
for a B-side: the DVD portion will include the entire album in 5.1
channel surround sound and in 2-channel stereo, as well as a special Devils & Dust film by Danny Clinch, capturing Springsteen at work. Clinch, whose work with Bruce has included The Rising album cover as well as the "Countin’ on a Miracle" video, filmed acoustic performances of five songs to be included here: "Devils & Dust," "Long Time Comin’," "Reno," "All I’m Thinkin’ About," and "Matamoras Banks.""