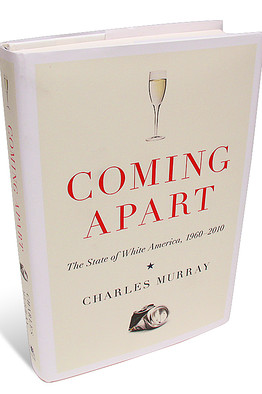 It seems like everybody is talking about this book right now: Coming Apart by Charles Murray. Both those on the left and the right are talking about (and arguing about) this book, most likely due to its author. Murray wrote the very controversial book The Bell Curve, a book about intelligence and class structure that many believed was racist. His latest book is everywhere: David Brooks writes about it, On Point with Tom Ashbrook talks about it, Book TV is airing a speech delivered by Murray, The Wall Street Journal reviews it, and here is a review from Timothy Noah in The New Republic. Many reviewers agree with his description of America’s cultural conditions, but they disagree with him about how conditions got this way and what we should do about it.

Noah writes a good review of Murray’s book. From his review: “Murrayâ€™s book has taken some unfair criticism for ignoring lower-to-middle-income African Americans and Latinos. Murray focuses on white America not because he doesnâ€™t care about non-whites, but rather because he wants to describe various self-destructive behaviors afflicting the working classâ€”he doesnâ€™t call them â€œpathologies,â€ but thatâ€™s more or less what he meansâ€”without drawing accusations of racist victim-blaming. That has been an occupational hazard for Murray ever since he coauthored, with Richard J. Herrnstein, The Bell Curve: Intelligence and Class Structure in American Life, in 1994, which attributed much of the achievement gap between blacks and whites to what Herrnstein and Murray claimed was blacksâ€™ inherent and genetically-based mental inferiority. The scholarly community was near-unanimous in finding Herrnstein and Murrayâ€™s evidence on this point unpersuasive and their conclusion repugnant.”

Later in his review, Noah points out where many who disagree about the book might differ in their opinions. “Where Murray parts company with most others is in denying that the cleavages he is describing are rooted in realities, such as the relative availability of jobs and the growing income gap between Belmont and Fishtown. Murrayâ€™s refusal to accept this mainstream narrative ought to occasion lots of bold reinterpretation of the numbers and at least one full chapter laying out in detail his reasoned refutation of the conventional wisdom. At an earlier stage in his career Murray would probably have done this. In Coming Apart, though, he confines himself to a few stray provocations.”

One good point about the book is made here in another review in The New Republic by Alec MacGillis: “But hereâ€™s the thing: that Murray is overlooking the actual work that is no longer available to many working-class men is particularly odd given that his own vision of a lost cross-class togetherness is based on, well, that lost work. In todayâ€™s New York Times profile of Murray, he says that the mingling of classes that the country needs more of, and that he has sought by moving his family to semi-rural Burkittsville, Md., â€œapproximates the small-town virtues he enjoyed growing up in Newton, Iowa, where, as the son of a manager at Maytag, he could mingle easily with the children of assembly-line workers. A-ha! Yes, Maytag was once in Newton, Iowa. And then in 2006, Whirlpool bought it and shut down the headquarters and manufacturing plant in Newton, sending jobs to Mexico.”

A problem of cultural inequality exists. But what it means, and what, if-anything, should be done about it is a point of often contentious debate.