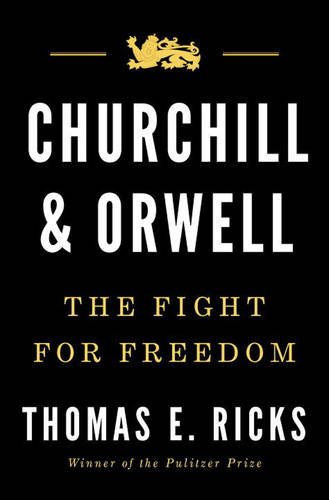 Pulitzer Prize-winning journalist Thomas Ricks has written a new book that I believe will be another best-seller: a dual biography of Winston Churchill and George Orwell. From the publisher’s description of the book: “No one would have predicted that by the end of the 20th century they would be considered two of the most important people in British history for having the vision and courage to campaign tirelessly, in words and in deeds, against the totalitarian threat from both the left and the right.” Churchill and Orwell both believed that freedom was the important issue and that “a government that denied its people basic freedoms was a totalitarian menace and had to be resisted.”

Also from the publisher’s description: “In the end, Churchill and Orwell proved their ageâ€™s necessary men. The glorious climax of Churchill and Orwell is the work they both did in the decade of the 1940â€™s to triumph over freedomâ€™s enemies. And though Churchill played the larger role in the defeat of Hitler and the Axis, Orwellâ€™s reckoning with the menace of authoritarian rule in Animal Farm and 1984 would define the stakes of the Cold War for its 50-year course, and continues to give inspiration to fighters for freedom to this day. Taken together, in Thomas E. Ricksâ€™s masterful hands, their lives are a beautiful testament to the power of moral conviction, and to the courage it can take to stay true to it, through thick and thin.”

I’m looking forward to picking up a copy. Watch an interview with the author from CSPAN here.