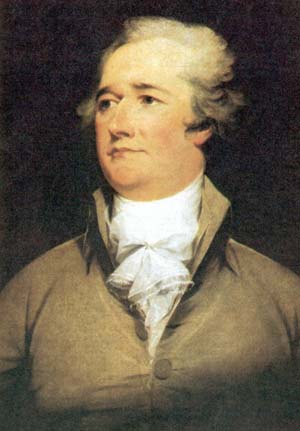 “In 1803, [under the Sedition Act] a grand jury in Columbia County, New York, indicted Harry Croswell for seditious libel against President Jefferson,” writes author Ron Chernow in his wonderful new biography, Alexander Hamilton. As his defense lawyer, Croswell wanted Hamilton. The case generated intense political heat, and while Hamilton could not participate in the early stages of the trial due to prior commitments, he did agree to take part. “By the time the circuit court convened in the small brick courthouse in Claverack, New York, in July, Hamilton had agreed to join the defense team. Because the case touched on two momentous constitutional issues, freedom of the press and trial by jury, he waived any fee.”

It was a surprise for me to learn when I read the book that Hamilton was involved in such a landmark case involving freedom of the press. As readers of the book may know, Hamilton was treated horribly in the press of the day, which was much more vile than it is today (if you can believe that). Nonetheless, Hamilton thought it important that freedoms be protected, and that one way to do so was to ensure that publishers had the right to claim that truth in a published report, no matter how damning, is protection under the law. “The standard heretofore had been that plaintiffs in libel cases needed to prove only that statements made against them were defamatory, not that they were false,” writes Chernow.

Hamilton lost his case, largely due to the fact that the judge, Morgan Lewis, “reverted to common law doctrine and otherwise told the jury to determine whether Harry Croswell had indeed published libelous words about Jefferson, not whether they were true or not. (Incidentally, or ironically, Croswell had published stories that Jefferson had hired a person to write slanderously about George Washington, calling him a traitor, a robber, and a perjurer; and that Jefferson has also led the charge against John Adams by calling Adams a hoary-headed incendiary. All of which were true).

In early 1804, Hamilton went before the state supreme court in Albany to plead for a new trial. On the bench were three Republican justices (Hamilton was a Federalist). Hamilton’s speech was so eagerly anticipated that the Senate and Assembly Chambers emptied when he spoke, writes Chernow. He did not disappoint. Said Hamilton: “The liberty of the press consists, in my idea, in publishing the truth from good motives and for justifiable ends, even though it reflect on government, on magistrates, or individuals.” Considering the press of the day, writes Chernow, Hamilton did not endorse a completely unfettered press. “I consider this spirit of abuse and calumny as the pest of society. I know the best of men are not exempt from the attacks of slander … Drops of water in long and continued succession will wear out the adamant.” Hence the importance of truth, fairness and absence of malice in reportage.

An excerpt from Chernow’s wonderful book: “Only a free press could check the abuses of executive power, Hamilton asserted [in his six-hour speech in front of the court]. He never mentioned Jefferson directly, but the president’s shadow flickered intermittently over his speech. In describing the need for unvarnished press coverage of elected official, Hamilton reminded the judges “how often the hypocrite goes from stage to stage of public fame, under false array, and how often when men attained the last objects of their wishes, they change from that which they seemed to be.” In case any auditors missed the allusion, Hamilton added that “men the most zealous reverers of the people’s rights have, when placed on the highest seat of power, become their most deadly oppressors. It becomes therefore necessary to observe the actual conduct of those who are thus raised up.”

Chernow writes, “By spotlighting the issue of intent, Hamilton identified the criteria for libel that still hold sway in America today: that the writing in question must be false, defamatory, and malicious … Hamilton showed how truth and intent were inextricably linked: “Its being a truth is a reason to infer that there was no design to injure another.””