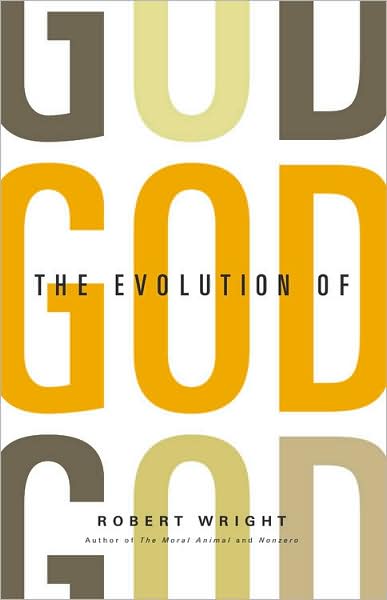 It’s the end of the year and I think it’s time to throw my choice into the “best-of” mix. My choice this year is The Evolution of God by Robert Wright. I wouldn’t necessarily call it the best book of the year, or my favorite. But I am calling it my book of the year for its bold attempt to tackle a big idea. I have greatly admired all of Wright’s work; he writes those big-idea books that incorporate data and theories from across many fields of study.

Althought I don’t think any book or author can have the final say on religion, science and society, this book creates a unique framework for future study of how religion and culture evolved over the centuries. Wright builds on themes that he explores in some of his earlier books, primarily that of Nonzero: The Logic of Human Destiny–the idea that people enter relationships that are of mutual benefit. Does he come to a final conclussion as to whether he believes in God, or that God is a creation and function of societies? Maybe both. Here is how author ?? describes the book in this recent and thorough review of the book in the New York Review of Books:

“Wright thus offers what he emphasizes is a materialist account of religion. As he further emphasizes, the ways in which religion responds to the world make sense. Like organisms, religions respond adaptively to the world. More formally, Wright argues that religious responses to reality are generally explained by game theory and evolutionary psychology, the subjects of his previous books. Subtle aspects of the human mind, he claims, were shaped by Darwinian natural selection to allow us to recognize and take advantage of certain social situations. The most important of theseâ€”and the centerpiece of Wright’s theoryâ€”are what game theorists call non-zero-sum interactions. Unlike zero-sum games, wherein one player’s gain is another player’s loss, in some games both players can win; hence “non-zero-sum.” The classic example is economic trade. In a free market, trade occurs when both parties benefit from exchange (otherwise they wouldn’t engage in it) …

“One consequence of the growing number of non-zero-sum interactions was that, through time, the “moral circle” expanded. While primitive man tended to view only his clan or tribe as fully human and so worthy of moral consideration, the ties forged among peoples via their cooperative interactions encouraged them to expand the moral circle from tribe, to ethnic group, to nation, and ultimately to all human beings.”