All the Great Prizes 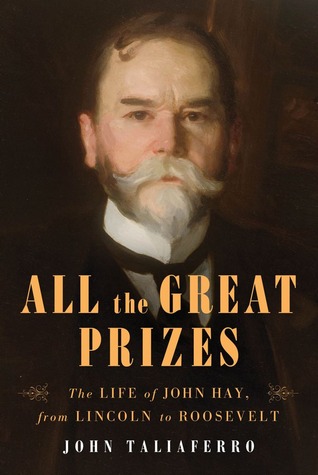 I’m looking forward to getting into John Taliaferroâ€™s book called All the Great Prizes: The Life of John Hay, from Lincoln to Roosevelt. Young John Hay was an aide to President Lincoln. Throughout his career, he became friends with the important people of the era: Mark Twain, Horace Greeley, Henry Adams, Henry James, and “virtually every president, sovereign, author, artist, power broker, and robber baron of the Gilded Age,” according the book’s description at Barnes and Noble.

“John Hay was both witness and author of many of the most significant chapters in American historyâ€” from the birth of the Republican Party, the Civil War, and the Spanish-American War, to the prelude to the First World War. Much of what we know about Abraham Lincoln and Theodore Roosevelt comes to us through the observations Hay made while private secretary to one and secretary of state to the other. With All the Great Prizes, the first authoritative biography of Hay in eighty years, Taliaferro has turned the lens around, rendering a rich and fascinating portrait of this brilliant American and his many worlds.”

Here, the author speaks about his book and John Hay’s remarkable life: