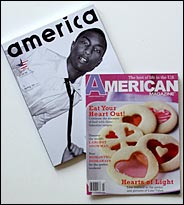 I like this story. One, I enjoy reading about new magazines. But I also like this story for what it suggests about our country. What is the real America? It’s a tale of two magazines. One is a sunny, rural folksy publication located in Memphis. The other, a hip-hop, pop magazine about how music is a force for current American culture. Both are real. Both are true. Both have the same name.

“The magazines, with names separated by nothing more than a single letter, will probably not share a single reader,” writes David Carr in the New York Times. Carr writes: “That two publications with so little in common have chosen such similar names says something about the mutability of the word “America” and the bifurcated republic it represents.

“The two magazines nicely convey the dyads: rural and urban, mass and elite, red and blue. America’s America is sleek, multiracial and wonderfully coiffed. The images on the oversize, foil-edged pages are outrÃ©; in one photo essay the actress Juliette Lewis is curled up in a refrigerator, having a moment with herself. Using hip-hop as its motif the magazine roams across fashion, film and technology. It takes the reader behind the velvet ropes and assumes anyone who is reading it belongs there: America magazine defines and covers its own species.

“American Magazine’s America seems more like a teddy bear you can hold on your lap. The January-February issue was anchored by photographs of Valentine’s Day cookies, with 40 or so hearts sprinkled through pages that included a paean to the world’s largest snowman and a story about being nice to strangers. This is a magazine in which nobody is special because everybody is special, in which warm, friendly people move through vast, pretty landscapes.”

It seems that all is not exactly well with naming the magazines America and American. Some quoted in Carr’s article are upset with the play on using the country’s identity as a label for “special-interest” publications–which was purely intentional with one of the publications. “America means a lot of things,” says one critic in the article, “but it certainly is not a brand.” What do you think? Check out David Carr’s article in the Times. Share your views.