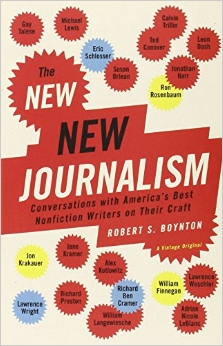 I found a new book I want to put on my list to read (which is getting too big these days). It’s called The New New Journalism, and includes interviews with the best writers practicing long-form journalism today. I still have dreams of completing such a project some day. (Maybe I will talk about it here more often.) Here is what the publisher has to say about the collection of essays.

"Forty years after Tom Wolfe, the late Hunter S. Thompson, and Gay Talese launched the New Journalism movement, Robert S. Boynton sits down with nineteen practitioners of what he calls the New New Journalism to discuss their methods, writings and careers. The New New Journalists are first and foremost brilliant reporters who immerse themselves completely in their subjects. Jon Krakauer accompanies a mountaineering expedition to Everest. Ted Conover works for nearly a year as a prison guard. Susan Orlean follows orchid fanciers to reveal an obsessive subculture few knew existed. Adrian Nicole LeBlanc spends nearly a decade reporting on a family in the South Bronx. And like their muckraking early twentieth-century precursors, they are drawn to the most pressing issues of the day: Alex Kotlowitz, Leon Dash, and William Finnegan to race and class; Ron Rosenbaum to the problem of evil; Michael Lewis to boom-and-bust economies; Richard Ben Cramer to the nitty gritty of politics. How do they do it? In these interviews, they reveal the techniques and inspirations behind their acclaimed works, from their felt-tip pens, tape recorders, long car rides, and assumed identities; to their intimate understanding of the way a truly great story unfolds."

Here is an article about the collection written by Julia Klein in the Columbia Journalism Review. One interesting point she notes is that very few of the writers were trained in conventional journalism programs (my graduate degree wasn’t in journalism either). Another fact that she highlights is that none of the authors hide their own opinions or biases on the subjects covered. In fact, they are part of the selling point of the piece. I actually agree that it isn’t a problem that writers share their feelings or lean one way or the other in taking a particular angle on such topics, particularly for long-form journalism, as long as it doesn’t cause them to ignore certain facts or twist the truth. I think some of the best creative nonfiction that I have read includes the evolution of the author’s feelings in the course of the book’s narrative as they research and experience their sub-culture or subject matter first hand.

Klein also makes a good point in questioning why most of the authors collected here are male. "Is the culprit rank sexism? Male editors hiring their male buddies? Or else the magazineâ€™s preference for subjects such as war and politics that draw more male writers? Do women writers, facing rejection, discourage more easily? (Iâ€™ve heard that thesis proposed.) Or, as devoted mothers and daughters and wives, are they simply unavailable to devote the months and years of zealous, almost superhuman effort required by immersion journalism? There is surely no single, and no easy, answer."

Jack Shafer of the New York Times has a review of the book in this weekend’s Book Review. He wonders what’s so "new" about this so-called "new" new journalism. "And there can’t be all that much ”New New” about Gay Talese, Calvin Trillin and Jane Kramer, all of whom have been writing feature journalism since the early 1960’s," Shafer writes. "Evidence that the two schools span a shared literary continuum resides in the fact that Talese appears in both Boynton and Wolfe’s pantheons. Several of Wolfe’s writers (Garry Wills, James Mills, Joe McGinniss) fit the New New journalism mold, and several of Boynton’s writers (reporter-artists Ron Rosenbaum, Richard Ben Cramer and Michael Lewis) wouldn’t be arrested for loitering if they appeared in a revised edition of Wolfe’s anthology."