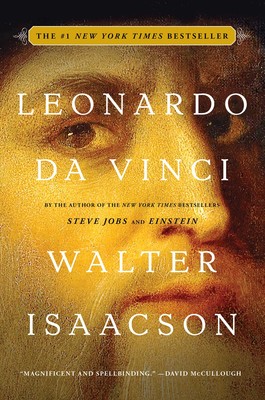 From the publisher: “Based on thousands of pages from Leonardo da Vinci’s astonishing notebooks and new discoveries about his life and work, Walter Isaacson “deftly reveals an intimate Leonardo” (San Francisco Chronicle) in a narrative that connects his art to his science. He shows how Leonardo’s genius was based on skills we can improve in ourselves, such as passionate curiosity, careful observation, and an imagination so playful that it flirted with fantasy.

“He produced the two most famous paintings in history, The Last Supper and the Mona Lisa. With a passion that sometimes became obsessive, he pursued innovative studies of anatomy, fossils, birds, the heart, flying machines, botany, geology, and weaponry. He explored the math of optics, showed how light rays strike the cornea, and produced illusions of changing perspectives in The Last Supper. His ability to stand at the crossroads of the humanities and the sciences, made iconic by his drawing of Vitruvian Man, made him history’s most creative genius.”