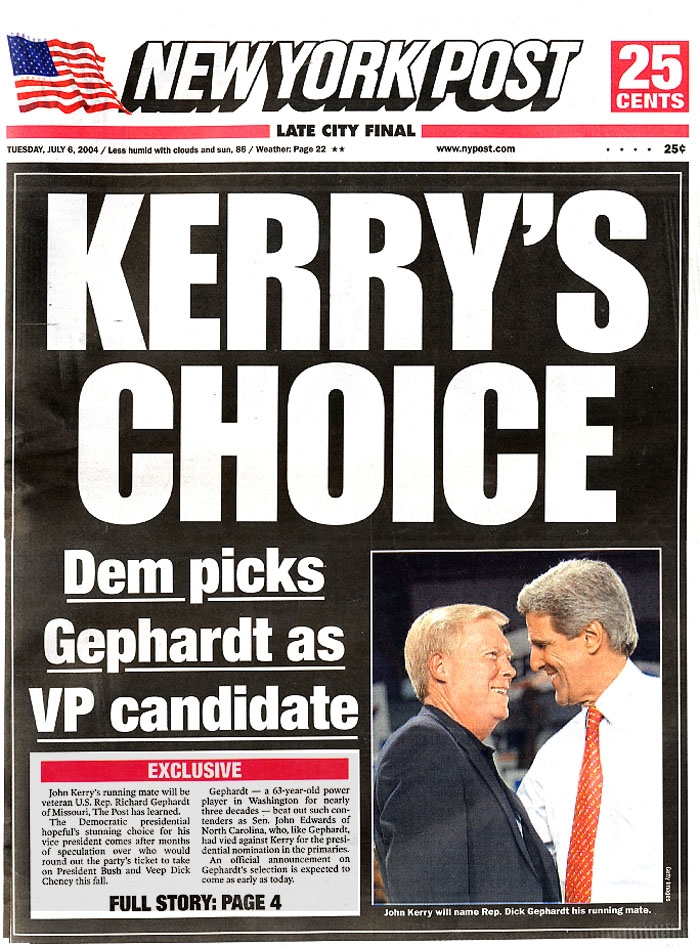 Did anyone catch this gaffe by the New York Post? I guess the final call on the cover story tip, according to an article in today’s New York Times, came from none other than Rupert Murdoch himself.

According to the Times story, Murdoch called in the tip saying for certain that the pick was to be Gephardt. At the time, the editors of the paper had a story prepared that stated the announcement was to be made the next morning. At the last minute, the call came in and the paper was changed. The Times reports that New York Post executives deny the accusation. The Post employee quoted in the story “demanded anonymity, saying senior editors had warned that those who discussed the Gephardt gaffe with other news organizations would lose their jobs.”

Here is a remaining excerpt from the Times story: “Howard Rubenstein, a spokedsman for the Post, said the paper “stands by its flat denial that Rupert was the source of the story, nor did he order the story in.” Mr. Rubenstein emphasized that his own source for this denial was Col Allan, the paper’s editor in chief.

“Mr. Rubenstein said that Mr. Allan ordered the article rewritten Monday night and had himself written the headline for the cover of the newspaper. It said: “Dem picks Gephardt as VP candidate.”

“Mr. Murdoch, asked by CNBC about the Gephardt article in a brief interview on Tuesday from a conclave of media and technology executives in Sun Valley, Idaho, seemed to point to others. “Everybody made a mistake and they are embarrassed and they have apologized for it and it happens even on NBC sometimes,” he said.