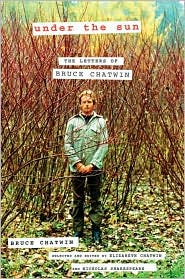 I’m a great fan of Bruce Chatwin’s writing. I’ve read all of his works aside from one of his “novels” (fans will know why I put that in quotes) as well as two biographies, so I was excited to learn that a volume of his letters is to be published in February titled Under the Sun: The Letters of Bruce Chatwin. The book is already available in the UK, and author William Dalrymple, who knew Chatwin, writes a wonderful review of his book. In his review, Dalrymple writes of an encounter with Chatwin that was a typical experience for all those who met him. A painter whom he knew invited him to a lunch that was for his friend.

“That friend turned out to be Bruce Chatwin, and the lunch was one of those encounters that happen only once or twice in a lifetime and that really do change the direction you end up taking. Chatwin, I thought, was simply astounding. As we sat in the panelled dining room, surrounded by whispering pin-striped clubmen, my small fragments of glazed tile were the starting point for a conversational riff that moved from the nomads of Mongolia in the thirteenth century and cantered over the steppes to Timurid Herat, then leapt polymathically to Ibn Battuta, Ibn Khaldun, Sufi sheikhs and the shamans of the Kalahari bushmen; before long we were being told about Taoist sages, Aboriginal â€œdreamingâ€ pictures and ancient Cycladic sculpture and thence, as coffee came, via Proust and Pascal and Berenson, to Derekâ€™s portraits, and the latterâ€™s story about sharing a railway carriage with Robert Byron who performed a pitch-perfect imitation of Queen Victoria, using the trainâ€™s antimacassar as the Queenâ€™s mourning veil.”

I am actually a big fan of The Songlines, which Darylmple considers one of his lesser works here in this review. It is hard to describe what it is about Chatwin’s writing that is so unique, but I think Darylmple gets to it closer than I am able. Again from the review of his letters:

“Everything he wrote made clear the degree to which he seemed to have been everywhere and read everything. His range was unparalleled. Obscure writers and unlikely places tripped off his pen in an intoxicating stream: The Mountains of the Air, Osip Mandelstam, Li Po, Dahomey, the Novgorod Chronicles. Disparate ideas from different ends of the earth suddenly found themselves connected in exhilarating leaps of imagination and insight: Chekhov waltzed past arm in arm with Ibn Khaldun; Gauguin found himself nestling up to Mad Kit Smart and a tribe of â€œKiplingâ€™s fuzzy-wuzziesâ€; â€œthe couturier Madeleine Vionnetâ€ put in an unexpected appearance in the same paragraph as Herodotus, Baudelaire and St Francis of Assisi. The humdrum and tedious evaporate in a white heat of breathless exotica. In Chatwin books, people nonchalantly eat fricassee of crocodile and drink cocktails of sour milk, crushed millet and honey. Even a childhood trip to Filey seems outlandishly literary by the time Chatwin has finished with it.”