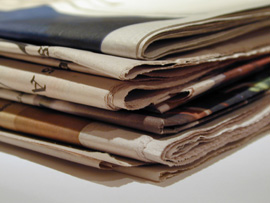 I recently came across an interesting blog for those who follow the media. It’s called Regret the Error, and it simply tracks all of the errors made by major media outlets across the country. It’s fascinating. It includes links to the correction pages to newspapers, magazines, and broadcast networks. It also includes links to various Web sites that discuss media issues.

Here’s a somewhat funny error the blog recently highlighted regarding my hometown newspaper, the Star Tribune. “In a story on Page B3 Wednesday, the word “mayors’ ” was omitted from a quote attributed to Randy Harmes, a Mankato firefighter. He was referring to St. Paul Mayor Randy Kelly’s decision to back President Bush and former St. Paul Mayor Norm Coleman’s decision to switch parties and become a Republican. Harmes jokingly said he wondered whether “someone was spiking the mayors’ drinking water in St. Paul that makes them go over to the ‘dark side.’ “