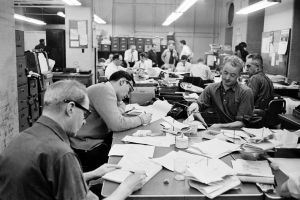 This is an older article I recently stumbled upon, but it is a topic of interest: the philosophy of journalism. The article asks why it is difficult to find a philosophy of journalism at college campuses across the country. “Why, at a time of breakneck technological and social revolution in news and newsrooms, do deans and presidents permit ossified philosophy departments to abdicate their responsibility to cover the world by not thinking about the media?” writes Carlin Romano. “How can it be that journalism and philosophy, the two humanistic intellectual activities that most boldly (and some think obnoxiously) vaunt their primary devotion to truth, are barely on speaking terms?”

Even though he doesn’t say it outright, Romano, a teacher at the University of Pennsylvania, believes journalism programs lack intellectual depth and fail to address the bigger questions when teaching their students. He writes, “Broadly speaking, we need philosophers who understand how epistemology and the establishment of truth claims function in the real world outside seminars and journals — the role of recognized authorities, of decision, of conscious intersubjective setting of standards. And we need journalists who scrutinize and question not just government officials, PR releases, and leaked documents, but their own preconceptions about every aspect of their business. We need journalists who think about how many examples are required to assert a generalization, what the role of the press ought to be in the state, how the boundaries of words are fixed or indeterminate in Wittgensteinian ways, and how their daily practice does or does not resemble art or science.”

Romero writes that all journalism students must at least be required to take a history of journalism course. I was, and I believe my alma mater, the University of Nebraska, succeeds in this area. Many of these discussions were required in courses such as media history and media law. It’s what makes the program a standout above many journalism programs throughout the country.

This article provides much food for further thought. “There’s a great history to be written of philosophers’ engagement with journalism, from Hegel’s citation of the daily newspaper as his morning prayer, to Ortega y Gasset’s lessons from newspaper life, to Russell’s widespread freelancing and the later Wittgenstein’s instantiation of conceptual journalism as a philosophical method.”