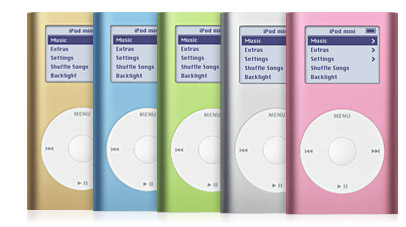 This is pretty cool. George Masters, a school teacher and amateur video producer, recently made his own commercial for his beloved iPod mini. It’s very good, and it seems to be making the rounds online.

It has even caught the attention of Wired magazine: “The ad has caught the attention of marketers, who praise its professional production values and say itâ€™s one of the first â€œpureâ€ advertisements seen on the internet. Though homemade ads are nothing new, most are parodies, protests or political commentaries. Bruce Rubel, a vice president at New York PR agency CooperKatz and author of the Micro Persuasion web log, said evangelistic customers like Masters will increasingly play a role in marketing. â€˜Itâ€™s a sign that consumers want to have a role in promoting a product they love,â€™ he said. â€˜Thereâ€™s a real trend toward consumer-generated media. People are creating news, theyâ€™re blogging. People will create marketing as well. This guy is a great example.”
â€” Leander Kahney, Wired News

Is this the start of a trend? I’m not sure. The folks at the Unofficial Apple Weblog had this to say about it. “I think itâ€™s less that consumers want to be marketers, and more that consumers donâ€™t want to be consumers. Or rather, we donâ€™t want to be *mere* consumers, passively absorbing whatever is dished out by capitalist machinery. People are creative by nature; give us a platform for self-expression and weâ€™ll go to town – hence blogging merrily takes off of its own accord, leaving major media scratching its head.”

I can’t wait to actually join this group of iPod lovers. The iPod (the big one) is on my Christmas list, but my wife has made it pretty clear that I have to go out and buy one if I really think I need it. Maybe it’s a ruse to throw me off track?