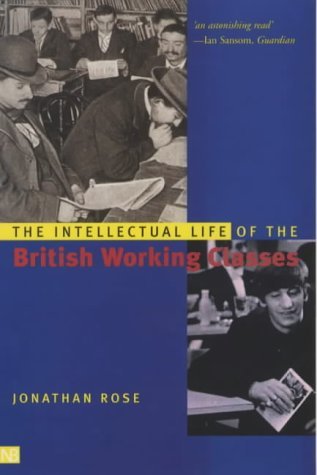 Here is the book that relates to an earlier post I made regarding intellectual life. Jonathan Rose’s recent article was excerpted from his own book titled The Intellectual Life of the British Working Classes. Herre is how Amazon describes the book.

“Which books did the British working classes read–and how did they read them? How did they respond to canonical authors, penny dreadfuls, classical music, school stories, Shakespeare, Marx, Hollywood movies, imperialist propaganda, the Bible, the BBC, the Bloomsbury Group? What was the quality of their classroom education? How did they educate themselves? What was their level of cultural literacy: how much did they know about politics, science, history, philosophy, poetry, and sexuality? Who were the proletarian intellectuals, and why did they pursue the life of the mind? These intriguing questions, which until recently historians considered unanswerable, are addressed in this book. Using innovative research techniques and a vast range of unexpected sources, The Intellectual Life of the British Working Classes tracks the rise and decline of the British autodidact from the pre-industrial era to the twentieth century. It offers a new method for cultural historians–an “audience history” that recovers the responses of readers, students, theatergoers, filmgoers, and radio listeners. Jonathan Rose provides an intellectual history of people who were not expected to think for themselves, told from their perspective. He draws on workers’ memoirs, oral history, social surveys, opinion polls, school records, library registers, and newspapers. Through its novel and challenging approach to literary history, the book gains access to politics, ideology, popular culture, and social relationships across two centuries of British working-class experience.”

I think I want to add this to my list of books to read. It’s an interesting look at the life of the mind and the life of a society’s “culture” as well, however you define that. One London said this when describing the book: “A vast popular movement of voluntary collectivism created a hugely impressive working class culture – mutual improvement societies, Sunday schools, adult schools, libraries, reading circles, drama societies, musical groups, friendly societies, trade unions and mechanics’ institutes. The London Corresponding Society, the world’s first working class political organisation, met weekly; readings aloud provoked democratic discussion. Education’s purpose is to teach us to think for ourselves. The working class’s self-improving culture encouraged them to ask questions and voice their thoughts and feelings.” I like the thought of ideas discussed in the public square with a mind toward civic duty as well as self-improvement.