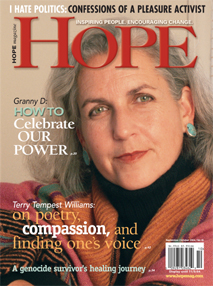 It’s sad to report that a magazine that I admired a great deal may be seeing the end of its run. The magazine is called Hope, and it serves to call out those great works of altruistic kindness that some heroes in our communities achieve every day, often unnoticed. Here’s the report from the Associated Press, as it was reported on September 10. In honor of Hope’s great idea, I hope the AP doesn’t mind if I reprint their story here:

“After operating for nearly nine years at a loss, the magazine created to inform and inspire readers to strive to make a difference in their worlds will cease publication in its current form at the end of the year, according to Publisher Jon Wilson.

“But Wilson has not given up Hope completely, and he is seeking another venue for the magazine. “We can’t publish through the end of the year,” Wilson said Thursday. “We’re hoping to find someone or some organization that can keep Hope going.”

“Hope’s staff is currently working on the November-December issue of the bimonthly magazine, and that will be the last issue the company will publish, Wilson said. “After nine years of losses, we just can’t continue,” Wilson said. “We’ve lost way too much.”

“Wilson launched the magazine in 1996 in an effort to counter the “bad news” journalism he saw every day with stories about people who were striving to make the world a better place. It grew out of his success with WoodenBoat magazine, and its sister publication, Professional Boatbuilder, but Hope never gained the readership of those magazines.

“Despite changes in format over the years, a move to full color and scrapping a text-heavy presentation to tighter, punchier stories with a sharper focus, the magazine never garnered more than 20,000 subscribers. Hope has lost several million dollars since it began publishing, Wilson said, and has had to rely on financial support from WoodenBoat corporation from the beginning. “That’s a lot of money,” Wilson said. “We believed that if we had enough time, we could make it work. But we just couldn’t handle those losses any more. We can’t see a way of ending the losses, doing it the way we want to do it.”

“That said, the decision to halt publication was a difficult one, especially because it means the loss of jobs for the eight or so staff members at the magazine. “We have an incredible staff,” he said. “And we have no positions to move them to. That’s the hardest part of this especially in a small town, in a small county.”

“All of them are deeply committed to this idea. Nobody was here just for a job. This is a calling for every single one of them.” Although Wilson said he still believes there is a place for a magazine that shines a spotlight on things that “inspire the goodness in us …,” he acknowledged that readers seem to be drawn to the terrible news. Stories of goodness, he said, apparently were not dramatic enough for readers.

“Stories in Hope, he said, were hard to read, not only because of the subject matter, but because they carried with them an “inferred expectation” of action on the part of the reader. “It was a lot of work,” he said. “It was not enough just to read, you then had to do something.”

“With the final issue in the works, Wilson said they have one person searching to see if there is some way, with help from an individual or organization, that the magazine could be saved. “A lot of people believe in it,” he said.

“Ceasing publication also carries some responsibility, he said. “We still have a liability to our subscribers,” he said. “We owe our subscribers issues of some other magazine or a refund. We have a debt to pay and we need to make sure that this all ends with integrity.”

“Although sobered by the experience with Hope, Wilson remains “as naive and idealistic” as ever but has to concentrate on not losing money for a while. “This has only made us want to work to make a difference even more. We just can’t do it with Hope magazine.”