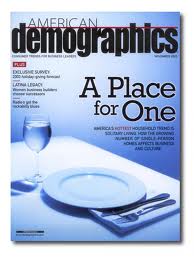 Could it be that American Demographics magazine will soon fade away? It seems that Primedia has had the magazine up for sale for the past two months, so far with no takers. Here’s a story from Folio. American Demographics is a favorite among readers looking to gain early insight into upcoming trends. The magazine is billed as a “marketing resource that business leaders and marketing executives rely on to stay ahead of the trends that impact America’s consumer marketplaces.”

According to Folio, Primedia officially declared American Demographics “discontinued” in August, and has since been trying to find a buyer. Two other publications put on the block at the same time have already found a new home. Crain Communications was rumored to be interested, but as Folio states in their report, they took a pass.

“Bill Morrow, EVP operations, refused to comment citing a confidentiality agreement,” said Folio’s report. “The Crain fit would be around its Advertising Age and B-to-B titles. At the time of the release of the last Census data in 2000, Ad Age and American Demographics executives had discussed collaborating on a series of co-branded reports for marketers, so the fit was at least explored at that time.

“Sources point to several factors that may take the wind out of a potential deal. One could be dwindling ad base. Ad revenues, which once totaled more than $1 million per year, have fallen sharply. Ad tracker IMS currently marks total ad revenue at about $500,000 through the September issue. A second issue could be the incredibly diverse, but dedicated, subscriber base that limits the reach of a particular ad buy. Paid subscription revenue had traditionally been the dominant revenue stream for AD.”

First launched in 1979 to 2,000 subscribers, American Demographics remains a favorite among its readers (me included). In 1997, the magazine was sold to Cowles, who soon thereafter sold the magazine to Primedia. At the time of that sale, according to Folio, the magazine was “was a profitable $5-6 million business with a circulation of about 40,000. Currently, the paid subscription base has slipped to 18,000.

Peter Francese, the magazine’s founding editor, said Primedia “treats the publication like a magazine, and that is dumb. It is a highly specialized information and knowledge resource.â€ He added that the magazine, if turned back into a portfolio of related properties including trade shows and other knowledge services, could â€œeasily become a $10 million per year business.â€ I hope the magazine finds a home. Readers know the value it adds to their businesses; it would be missed.