Best Book I Read This Year 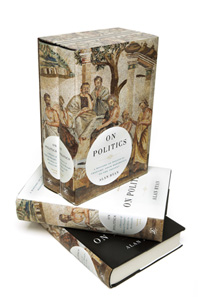 This year’s lists are out. The New York Times has made their picks of the best of the year. Writers at the Atlantic have each chosen their best reads as well. Do you have a favorite book from 2013? My favorite from the year was actually published in October 2012: On Politics: A History of Political Thought from Herodotus to the Present by Alan Ryan. Here is the publisher’s description:

“Three decades in the making, one of the most ambitious and comprehensive histories of political philosophy in nearly a century.

“Both a history and an examination of human thought and behavior spanning three thousand years, On Politics thrillingly traces the origins of political philosophy from the ancient Greeks to Machiavelli in Book I and from Hobbes to the present age in Book II. Whether examining Lord Actonâ€™s dictum that â€œabsolute power corrupts absolutelyâ€ or explicating John Stuart Millâ€™s contention that it is â€œbetter to be a human dissatisfied than a pig satisfied,â€ Alan Ryan evokes the lives and minds of our greatest thinkers in a way that makes reading about them a transcendent experience. Whether writing about Plato or Augustine, de Toqueville or Thomas Jefferson, Ryan brings a wisdom to his text that illuminates John Deweyâ€™s belief that the role of philosophy is less to see truth than to enhance experience. With this unparalleled tour de force, Ryan emerges in his own right as one of the most influential political philosophers of our time.”