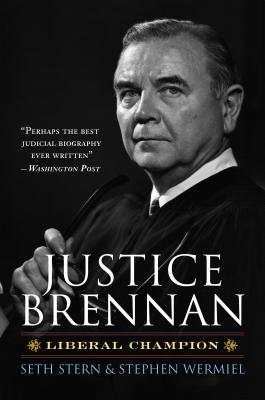 From the publisher: “In this sweeping and revealing insider study, Seth Stern and Stephen Wermiel shine a bright light on the life, career, and thought of William Brennan (1906-1997), widely considered the Supreme Court’s most influential twentieth-century justice, as well as its greatest liberal and preeminent strategist.

“Stern and Wermiel make available for the first time a striking new view of Brennan based on what Jeffrey Toobin has called a coveted set of documents–Justice Brennan’s very personal case histories of the major battles that confronted the Supreme Court during the past half century. Roe v. Wade, affirmative action, the death penalty, obscenity law, and the constitutional right to privacy are among the many controversial and hotly-contested big-picture issues covered in the Brennan annals. But they also provide more intimate glimpses of Brennan’s surprising refusal to hire female clerks, even as he wrote groundbreaking opinions relating to women’s rights; the complex tension between his commitment to law and his Catholic beliefs; and new details on his unprecedented working relationship with Chief Justice Earl Warren.

“Drawing upon Wermiel’s rare access to the Brennan case histories, half of which will not be released to the public until 2017, and his more than sixty hours of one-on-one interviews with Justice Brennan himself, the authors have crafted a compelling portrait of a judicial giant, filled with details and insights that will further cement Brennan’s reputation as an epic playmaker during the Court’s most liberal era.”