Is Journalism Worth Dying For? 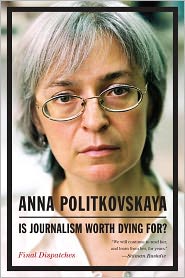 This post’s title is also the title of a book containing many essays and other works on the state of journalism by Anna Politkovskaya, a special correspondent for the Russian newspaper Novaya gazeta who was murdered in Moscow on October 7, 2006, for her probing works of investigative journalism. The book contains many of the pieces she was working on at the time of her assassination.

Is Journalism Worth Dying For? is reviewed at the Barnes and Noble Review by Jason Farago. He writes that Polikkovskaya’s “enduring importance derives from her refusal to capitulate despite seemingly unbearable pressureâ€”and, even more basically, her commitment to rigorous on-the-ground reporting when journalists, even when not faced with official intimidation, spend more time with PR flacks than sources and victims.”