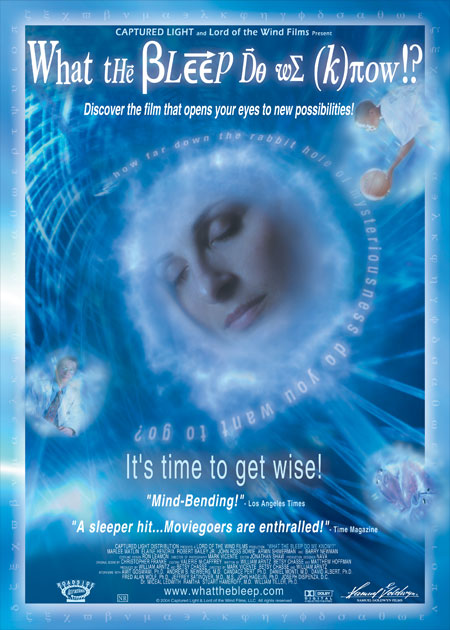 Some friends of mine just emailed me about this new film starring Marlee Matlin called What the (Bleep) Do We Know? It seems that is it gaining a cult following. From the Web site: “It’s a documentary. It’s a story. It has mind-blowing special effects. These three elements combine to bring about a film experience that will rock your mind and lift your soul! It’s a new genre about a New Worldview for a new audience.

“This outrageous film plunges you into a world where quantum uncertainty is demonstrated â€“ where neurological processes, and perceptual shifts are engaged and lived by its protagonist – where everything is alive, and reality is changed by every thought.

“It has been called by some theater goers The Handbook to The Matrix. Like The Matrix it shows you a greater reality behind the one we all accept as true, and you have the ability to create absolutely anything from your own thought while laughing all the way!

“The difference between this film and that movie is that this isn’t science fiction. It’s even stranger. It’s real. And it’s the first film to say it. And it does so boldly and with a BLEEP of a lot of humor. And it’s being proven every day by minds like these.”

Here’s how Sid Smith of the Chicago Tribune describes the movie: “Complex and subtle, the ramifications of quantum physics are still known only to those with some knowledge of modern science. “Bleep” seeks to explore those ramifications, toss in a few more about cellular life and then draw conclusions about what all this means to personal behavior and — get ready — our notions of God.

“That’s a phenomenally tall order. But, while not perfect, while overcharged with hyperkinetic animation, a somewhat underdeveloped fictional drama and an overly loud volume, this is a pretty impressive stab at bringing everyday thought in line with the revolutionary implications of scientific discovery.”

My graduate school alma mater emailed me seeing if I had any interest in attending a one credit seminar in April based on the film, to be taught by a futurist, a philosopher and a physics professor. How cool is that? Now, I really want to see it. I see it’s playing at a nearby theater–I hope I can make it before it leaves town.