The Shape of the New 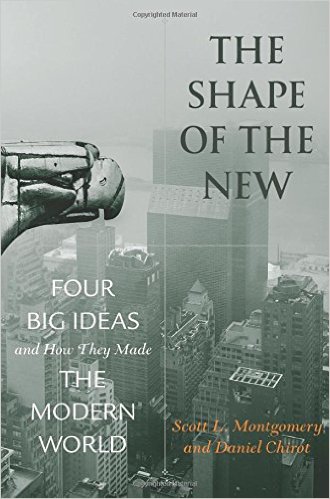 “An invasion of armies can be resisted, but not an idea whose time has come.”
Victor Hugo, ‘Histoire d’un crime,’ 1852

So begins an interesting new book that I just received as an early Christmas present from my wife: The Shape of the New. As Fareed Zakaria writes in his New York Times review of the book, authors Scott L. Montgomery and Daniel Chirot argue that ideas â€œdo not merely matter; they matter immensely, as they have been the source for decisions and actions that have structured the modern world.â€

“The authors adopt the conventional (and correct) view of the Enlightenment,” writes Zakaria, “that between the late 17th and early 19th centuries, a number of philosophers and other writers advanced theories â€” about economics, politics, science and society â€” that marked a decisive break with the past. These concepts, they believe, still define the modern world.” The book looks at four ideas and how they have shaped life as we know it today: Charles Darwin and evolution; Adam Smith and capitalism; Karl Marx and communism; and Thomas Jefferson and Alexander Hamilton and democracy.

Here is the Barnes and Noble description of the book: “A testament to the enduring power of ideas, The Shape of the New offers unforgettable portraits of Adam Smith, Thomas Jefferson, Alexander Hamilton, Charles Darwin, and Karl Marxâ€”heirs of the Enlightenment who embodied its highest ideals about progressâ€”and shows how their thoughts, over time and in the hands of their followers and opponents, transformed the very nature of our beliefs, institutions, economies, and politics. Yet these ideas also hold contradictions. They have been used in the service of brutal systems such as slavery and colonialism, been appropriated and twisted by monsters like Stalin and Hitler, and provoked reactions against the Enlightenment’s legacy by Islamic Salafists and the Christian Religious Right.

“The Shape of the New argues that it is impossible to understand the ideological and political conflicts of our own time without familiarizing ourselves with the history and internal tensions of these world-changing ideas. With passion and conviction, it exhorts us to recognize the central importance of these ideas as historical forces and pillars of the Western humanistic tradition. It makes the case that to read the works of the great thinkers is to gain invaluable insights into the ideas that have shaped how we think and what we believe.”

I’m looking forward to a few good reads over the holiday season.