The Bones of the Book 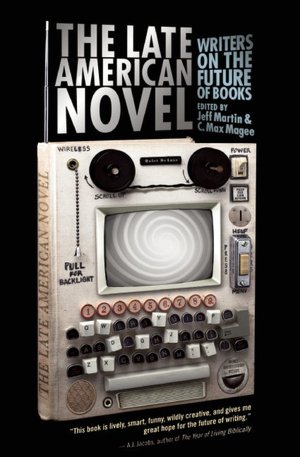 Robert Moor writes about the “bones of the book” at n+1. He reviews a book of essays titled, The Late American Novel: Writers on the Future of Books:

“Then I read the collectionâ€™s penultimate contribution, by the novelist Reif Larsen. In it, he makes an obvious but often unmentioned point: the book is a technology born of its circumstances, and ancient ones at that. Around the first century B.C.E. in Rome, the codexâ€™s bound papyrus or leather membranae replaced the polyptychâ€™s wax or wooden tablets (imagine the worldâ€™s bulkiest three-ring binder), making it possible to compile information at greater length and less weight. Unlike wax tablets, books didnâ€™t break or melt, and unlike scrolls, they could be quickly thumbed through to locate a desired passage. Students could carry them to their lectures, generals could mail them to the hinterland, and pagans could hide them in their robes. It was a revolutionary invention. But now consider the e-book, displayed on a slim electronic tablet, which can relay exponentially more information at even less weight, with even greater functionality. The proponent of paper books will one day sound â€œlike a Victorianâ€“era man arguing the benefits of candelight over Edisonâ€™s newfangled electric lanterns,â€ Larsen writes. Indeed, an e-book needs multiple pages and a cardboard cover like a lightbulb needs wax.”

Moor’s essay offers an interesting look at the history of the codex as it has developed into today’s e-book, which includes this interesting tidbit:

“The e-book is usually said to have been invented in 1971, when an undergrad at the University of Illinois, Michael S. Hart, decided to upload The Declaration of Independence onto an ARPAnet server. Sitting in the Materials Research Lab among hulking, warmly breathing Xerox Sigma V processors, Hart went on to input and share, with a quixotic singularity of purpose, text after text, from Peter Pan to The Tempest. Few saw the revolutionary implications of his actions until years later, when his Project Gutenbergâ€”which by then had uploaded thousands of booksâ€”began to attract copyright lawsuits and became a figurehead for the fledgling hacktivist and open source movements.”