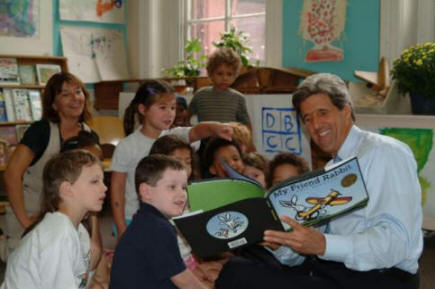 How preschool children experience picture books is affected by their mothers’ education level and by who is reading to them, says Jane Torr, a senior lecturer at the Institute of Early Childhood at Macquarie University, in Australia.

According to Torr’s article in the August issue of the Journal of Early Childhood Literacy, children whose mothers had earned college degrees engaged “with the text by making inferences, generalizing, explaining, and asking questions about the phenomena they encountered.”

Whether they were in preschool or at home made little difference in how children of college-educated mothers related to the text, Torr says, but the story was very different for children whose mothers had left school at 15 or 16 years of age.

Those children, when read to by their mothers, spoke less and interacted primarily by naming things they saw in the pictures, says Torr. However, when they were read to by college-educated preschool teachers, the children “interacted more around the texts and made connections between the written text and their own personal memories, their likes and dislikes, and other texts that they had encountered.”

“The findings suggest that the experience of reading the ‘same’ picture books is very different for the different groups of children,” Torr writes. And the results “provide strong support for those who claim that children of early-school-leaving mothers should have access to quality child care.”

The article, “Talking About Picture Books: The Influence of Maternal Education on Four-Year-Old Children’s Talk With Mothers and Pre-School Teachers,” is available online to members of subscribing institutions.