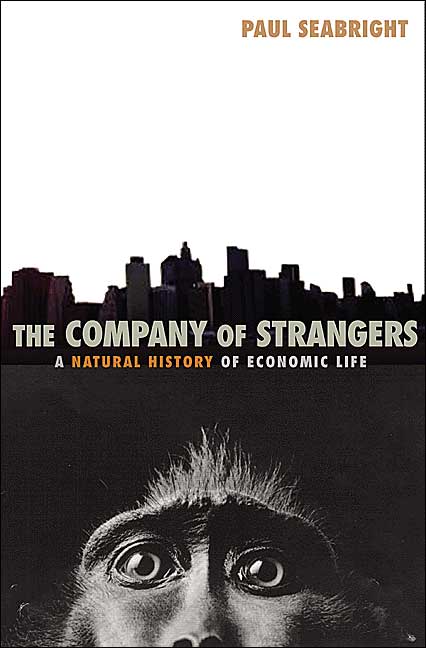 “Our everyday life is much stranger than we imagine, and rests on fragile foundations.” This is the intriguing first sentence of an intriguing new book about economics, and much else besides: â€œThe Company of Strangersâ€, by Paul Seabright, a professor of economics at the University of Toulouse. It is also the first sentence from a book review in the August 12 issue of The Economist.

“Why is everyday life so strange?” writes the Economist’s book reviewer. “Because, explains Mr Seabright, it is so much at odds with what would have seemed, as recently as 10,000 years ago, our evolutionary destiny. It was only then that â€œone of the most aggressive and elusive bandit species in the entire animal kingdomâ€ decided to settle down. In no more than the blink of an eye, in evolutionary time, these suspicious and untrusting creatures, these â€œshy, murderous apesâ€, developed co-operative networks of staggering scope and complexityâ€”networks that rely on trust among strangers. When you come to think about it, it was an extraordinarily improbable outcome.”

I think this is such an intriguing line of study; it partly informed my own work when I was completing my master’s degree. We are more connected than we think. So much of how we live depends on others. That can sound like a simple statement, but, think about it deeply for awhile. How we have benefited (and how have others been left out) depends so much on fragile mechanisms of cooperation. And when we study those connections, we come to a more profound understanding of our cultures, economics, science, art, and ultimately who we are as humans.

Adam Smith talked about these connections. From an economic perspective, everyone knows about The Wealth of Nations, a book that spoke of the wealth of communities and countries created by the division of labor. It’s a book that coined the term “the invisible hand,” that forces that guides everyone to succeed driven by self interest. In turn, society in general is benefited by that freedom and energy. For some, this theory has come to be seen as selfish, or Darwinian (incorrectly using the term), in that that is all there is. That people should only look after themselves to the best of their abilities has that “survival of the fittest” ring to it that is rather callous toward others. It doesn’t go far enough.

But, Adam Smith completed that equation on his own. It was in his often overlooked book published before the Wealth of Nations, called The Theory of Moral Sentiments, where he examines the nature of our relationships to one another. Smith examines the forces in an organized society that shape how we act, and drive us to do (and not to do) what is right and good.

“The requirements for such co-operation, and hence for modern economic life, which is founded on specialisation and an infinitely elaborated division of labour, are more demanding than you might suppose,” writes The Economist. “It is not enough to say that specialisation and the division of labour yield enormous economic benefits. Co-operation would nonetheless quickly break down if individuals could enjoy the advantages of division of labour without making a contribution of their own. Two traits were needed, says Mr Seabright, to bring the fruits of co-operation within reach, and evolution had equipped humans with bothâ€”accidentally, as it were. The first was an intellectual capacity for rational calculation. The second, somewhat at odds with the first, was an instinct for reciprocityâ€”a tendency to repay kindness with kindness and betrayal with revenge, even when rational calculation might seem to advise against it.”

I was watching a discussion on television with the renowned historian Edmund Morgan, author of many books, including a best-selling biography of Benjamin Franklin. During the question-and-answer period, Prof. Morgan said the book that had the most profound effect on how he viewed history was a book titled The Gift, by Marcel Mauss. This book’s subtitle is “the Form and Reason for Exchange in Archaic Societies.” The book as described by the publisher, “presents the first systematic study of the custom — widespread in primitive societies from ancient Rome to present-day Melanesia — of exchanging gifts.

“The gift is a perfect example of what Mauss calls a total social phenomenon, since it involves legal, economic, moral, religious, aesthetic, and other dimensions. He sees the gift exchange as related to individuals and groups as much as to the objects themselves, and his analysis calls into question the social conventions and economic systems that had been taken for granted for so many years.”

It is a study of the first systematic development of what Seabright calls our “fragile foundations.” Our attention to one another, through altruistic expressions, lay at the heart of our interconnectedness. Smith himself speaks of these feelings developing toward one another. In ‘of Virtue’ in The Theory of Moral Sentiments, he writes, “Among well-disposed people, the necessity or conveniency of mutual accommodation, very frequently produces a friendship not unlike that which takes place among those who are born to live in the same family. Colleagues in office, partners in trade, call one another brothers; and frequently feel towards one another as if they really were so. Their good agreement is an advantage to us all; and, if they are tolerably reasonable people, they are naturally disposed to agree. We expect that they should do so; and their disagreement is a sort of a small scandal. The Romans expressed this sort of attachment by the word necessitudo, which, from the etymology, seems to denote that it was imposed by the necessity of the situation.”

“The human capacity for calculation allowed this potential to be fully exploited,” writes the Economist, “because humans were able to design rules and institutions that, as Mr Seabright puts it, “make reciprocity go a long way” … Building on humans’ inherited instincts, these rules and institutions allow people to treat strangers as “honorary friends.””

The nature of such an examination into our individual and cultural character–from a perspective that utilizes science, economics, history, philosophy–is one that I feel will be developed in academia for decades to come. As time continues, and I read and think more about such connections, I can more fully understand the value of my Master of Liberal Studies degree. I think the most exciting scholarship will happen at the edge where curriculums connect.

Something intriguing is also happening where the rubber meets the road, so to speak. “If may be that the 1990s trend with staying power wasn’t the dot-coms, but the dot-orgs,” writes Cheryl Dahle in the September issue of Fast Company. “Says Professor James Austin of the Harvard Business School Social Enterprise Initiative: “The growth rate of new nonprofits now exceeds that of private business formation and government expansion. Entrepreneurs go where the action is.”

This new generation already has a new name: Generation And. I like that name. It seems they have an understanding of cross curriculum achievement, and that business and social change are interrelated. “It may be that business leaders are as maniacal about changing the world as their predecessors were about making Internet killings,” writes Dahle. In her story, one Stanford MBA student said it best: “I’ve become convinced that the market makes the world go around. If I want to make a difference, I need to learn how to use those forces for good.”

OK, this is the king of rambling posts. But it’s my blog and I am allowed. As always, let me know your thoughts.