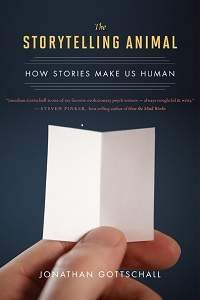 Jonathan Gottschall comes the closest to fully articulating a theory that I’ve long been interested in, and one that has probably not been given its full due: that science and storytelling are indeed connected. As he says in this interview at Edge: No matter where you go in the world, stories are universal and “universally the stories are more or less like ours: the same basic human obsessions, and the same basic structure. The structure comes down to: stories have a character, the character has a predicament or a problemâ€”they’re always problem-focusedâ€”and the character tries to solve the problem. In its most basic terms, that’s what a story isâ€”a problem solution narrative.” We live inside our stories.

I look forward to reading his most recent book: The Storytelling Animal: How Stories Make us Human. Here’s a partial description from Barnes and Noble: “Humans live in landscapes of make-believe. We spin fantasies. We devour novels, films, and plays. Even sporting events and criminal trials unfold as narratives. Yet the world of story has long remained an undiscovered and unmapped country. It’s easy to say that humans are “wired” for story, but why? … Drawing on the latest research in neuroscience, psychology, and evolutionary biology, Gottschall tells us what it means to be a storytelling animal. Did you know that the more absorbed you are in a story, the more it changes your behavior? That all children act out the same kinds of stories, whether they grow up in a slum or a suburb? That people who read more fiction are more empathetic?”

And here is the interview from Edge: