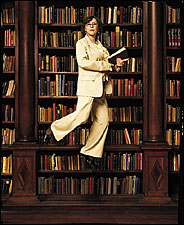 I want to apologize to any regular readers for being a poor blogger. I have been out of town, so I haven’t had time to post anything. I promise to keep up. So here is an interesting story about the fate of being a big time author today.

So you think learning to write is all that big-time writers must think about. Not so fast. Here is a clip from the New York Times about a newly famous writer: “In one whirlwind year, Azar Nafisi has found herself drawn further and further into the maddening, seductive fold of American success. She has gone from unknown academic Ã©migrÃ© to literary celebrity with the startling commercial success of “Reading Lolita in Tehran: A Memoir in Books,” about life and literature under the Islamic government in Iran. Pushed by world events that have made Muslim women interesting to American book club readers, the book is now in its 21st week on the paperback best-seller list of The New York Times.”

“The book made its paperback debut on The Times’s best-seller list in January, quickly moved to No. 1 and has sold 484,000 copies. The company has also sold rights in 22 countries.” It is quite an accomplishment for a nonfiction title, to say the least. And it has captured the attention of those who want to cash in on the reader demographics.

The article continues to quote Nafisi, “”How much time do you have to spend creating or not creating an image?” Part of maintaining that image has her taking part in a marketing campaign for Audi, sponsored by CondÃ© Nast. n exchange for her participation, for which she was not paid, Audi is sponsoring literary events in five cities. “To promote Audi, a picture of Ms. Nafisi, suspended in air in front of a shelf of books, appeared last month in several publications owned by Advance Magazine Group, CondÃ© Nast’s parent, including Vanity Fair, Wired, Golf Digest, The New Yorker and Vogue,” writes the New York Times’ Julie Salamon.

“She is joined by David Bowie (Audi is sponsoring his latest tour), the actor William H. Macy and the teenage soccer star Freddy Adu, all part of Audi of America’s “Never Follow” campaign to promote the brand to affluent and educated potential buyers.”

Is there such a thing as too much success for a writer? asked Salamon. “Now, Nafisi says, she fears the biggest obstacle to writing may be success. Before leaving Iran seven years ago, she said, “I wondered, `Will I ever be able without worry to sit down and write and teach?’ I can now complain to no one because no one is preventing me from writing. But they are, in a sense, by their enthusiasm. There are too many good people to talk to.”