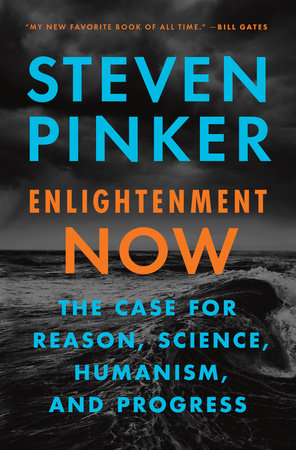 Steven Pinker’s latest book was published this week and I can’t wait to get a copy. Enlightenment Now can be seen as an extention of the argument made in his previous book, The Better Angels of Our Nature, that says, contrary to public opinion, the world is getting better not worse. Data show that with regard to health, violence and poverty, science has allowed humanity to improve living stadards around the globe. That is not to say that we no longer have big problems to solve. Instead, it argues that that the ideas tools brought about by the Enlightenment (science and reason) are those which should be cherished in today’s overheated political environment.

I’ve read everything Pinker has written, and I am sure this will be another wonderful book. In fact, Bill Gates has already called it his favorite book of all time. Here is an excerpt from the publisher’s book description:

“Far from being a naÃ¯ve hope, the Enlightenment, we now know, has worked. But more than ever, it needs a vigorous defense. The Enlightenment project swims against currents of human natureâ€“tribalism, authoritarianism, demonization, magical thinkingâ€“which demagogues are all too willing to exploit. Many commentators, committed to political, religious, or romantic ideologies, fight a rearguard action against it. The result is a corrosive fatalism and a willingness to wreck the precious institutions of liberal democracy and global cooperation.

“With intellectual depth and literary flair, Enlightenment Now makes the case for reason, science, and humanism: the ideals we need to confront our problems and continue our progress.”

Extra: Read Pinker’s essay, The Intellectual War on Science, in this week’s Chronicle of Higher Education. It will give you a good framework for his arguments.